Only 28% of Kiwis think the country is headed in the right direction — a record low. Only 18% think economic conditions will be better in a year.

The most disruptive example was its establishment of the underclass under the vaccine mandate; but it is attempting to do something more permanent with its "Three Waters" laws.

The "Three Waters" infrastructure reform appears to be a Tainui coup for control of the country.

The "co-governance" it entails is effectively a constitutional change because it removes vital assets from elected representation and gives control to iwi leaders. Three Waters should require a 75% majority to pass, not the 53% the Government has. Instead, Government attempted to do the opposite, using entrenchment in unprecedented fashion to make it impossible for future Parliaments to repeal without a 60% majority (60% because Parliament rules prohibit a number higher than the majority they had). This would have set a dangerous precedent and the Government backed off on this after bipartisan and official opposition.

It also sneaked in additional controls around coastal and geothermal waters — leading it to now be referred to as "Five Waters" (or even Six Waters). Government ended up pushing through this first of the water reform laws under extended hours so not all opposition MPs were in Wellington to vote, and without the support of the Greens or even the Maori party.

This isn't helping the Government's popularity, which is polling lower than ever, possibly the lowest of any Government since 1990s "Ruthanasia"; but the law's champion Nanaia Mahuta seems to be untouchable.

The arguments for the reform are smoke-screens:

Government is increasingly violating basic Parliamentary process and ignoring huge public opposition. Both Governments have been one-upping each other on this for decades, but this one is really jumping to the next level. National hasn't pushed back all that much because ultimately it wants the same power. No party in Parliament is calling for tighter limits or protection of rights — although some MPs would be in favour of such, they cannot step out of line from their party leaders.

Although they describe the situation well here, the solution proposed by libertarian tadpole parties like New Conservatives — of making the Bill of Rights supreme law — seems counterproductive. The balance of power between legislators (Parliament) and judiciary (Courts) has been moving away from Parliament for decades — and the Courts are not tending to rule in a direction the New Conservatives like. This can be seen in the Human Rights Act 1993 that was incorporated into the Bill of Rights, and various amendments to it that directly undermine various freedoms laid out in the Bill of Rights. But if this incorporation were removed, the proposal might work.

Three Waters is a consequence of the He Puapua agenda that John Key set us on the road to — a decision which was itself undemocratic because it violated National's "no surprises" agreement with ACT. National didn't actually do anything to implement it, but since August 2019 Labour has been working on it in earnest. We don't even know the details except through a report leaked to National.

He Puapua is explicitly about removing control from elected government and giving it to iwi. If it were merely separatist I might not oppose, if it were very well managed. But it's absolutely the opposite — it's being done sneakily. There has been no public consultation and there is little public knowledge. It's supposedly not official policy, but Government and many Government agencies, including police, are already acting as if it is. That's why iwi were allowed to act as police enforcing roadblocks during lockdown, and why Maori gangs were allowed large funerals while everyone else was not.

It's more than just separatism.

It involves entrenched socialism, "equality of outcome" — for one ethnicity only.

It involves culture forced from the top: "All New Zealanders will embrace and respect Maori culture as an integral part of national identity." We can already see how counterproductive this is, with a backlash that is reducing the embrace of Maori culture because it's so obviously pushed rather than organic or grassroots.

Most of all it involves undemocratic co-governance: "Law, policy, processes and entities will support a bicultural system of governance and management." This isn't just recognition of culture, it's constitutional change of our system of government.

We know Kiwis are not okay with Maori wards as they were universally opposed in referenda — even in highly Maori towns like Opotiki.

How many Kiwis are comfortable with the Maori health authority? Why not a Pasifika health authority, since they have similarly concerning health statistics to Maori? I mean we know why, but do we really want this division?

How many are okay with increasing tribal control over Conservation land — as seen in the destruction of DOC huts in the Ureweras, even in opposition to many Maori in the area?

How many Kiwis want more and more racial distinctions written into our law? How can that possibly reduce racial tension?

No amount of power can compensate for the past — and the view of history this drive is coming from is increasingly warped. 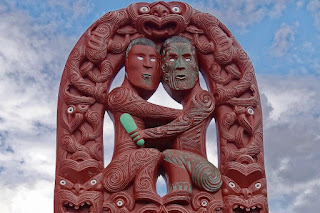